Wallace Invented 'New Style, New Comedy'http://www.npr.org/templates/story/story.php?storyId=94629055Author created 'Jest' in Syracusehttp://www.syracuse.com/news/index.ssf?/base/news-15/122155534751021.xml&coll=1In Memoriam: David Foster Wallace [pdf]http://www.pomona.edu/ADWR/president/dfw1.shtmlConsidering David Foster Wallace [iTunes]http://www.kcrw.com/etc/programs/pc/pc080916considering_david_foDavid Foster Wallace: Harper's Magazine [pdf]http://www.harpers.org/archive/2008/09/hbc-90003557David Foster Wallace: Commencement Speech at Kenyon Collegehttp://www.marginalia.org/dfw_kenyon_commencement.htmlFriends, acquaintances, fellow writers, and others all offered memories of author David Foster Wallace this week in articles, online treatises, weblog posts, and editorials. Wallace, who was perhaps best known for this sprawling masterwork "Infinite Jest", was thoroughly catholic in his interests, and his work was peppered with references to everything from Continental philosophy to the behavior of cruise line passengers. Writing in this Tuesday's New York Times, fellow writer Verlyn Klinkenborg commented, "His writing could subsume the DNA of any language, any form it encountered, while remaining completely his own." During his 46 years, Wallace was awarded the Aga Khan Prize for Fiction, a MacArthur Foundation "Genius Grant", and also taught at Illinois State University and Pomona College. While many websites offer a way to comment on Wallace's work and life, the "In Memoriam" site created by Pomona College provides a fine glimpse into the effect he had on those he taught and influenced. One comment offered by Sean Pollack is particularly poignant: "We mourn for a humane and generous teacher and lover of the language."The first link will take interested parties to the New York Times' obituary for David Foster Wallace which appeared in print this Monday. The second link will lead visitors to a remembrance of Wallace from fellow writer David Lipsky. Moving on, the third link leads to a Syracuse Post-Standard piece from this Tuesday about Wallace's time in Syracuse in the early 1990s. The fourth link leads to the previously mentioned Pomona College "In Memoriam" site created for Wallace. The fifth link leads to a special edition of "Politics of Culture" hosted by bookworm Michael Silverblatt. Joined by book critic Anthony Miller they discuss Wallace's impact on fiction, his generation, and American culture. In addition, a collection of interviews with Wallace culled from the archives of KCRW's "Bookworm" program is also available. In terms of celebrating Wallace's life and writing, the sixth link is a very welcome find indeed. It contains links to many of his non-fiction pieces, including his very observant and wonderful take on a cruise-line adventure, "Shipping Out: On the (nearly lethal) comforts of a luxury cruise". The last and final link leads to a transcript of the honest and insightful commencement address that Wallace gave at Kenyon College in 2005.
↓http://scout.wisc.edu/Reports/ScoutReport/2008/scout-080919 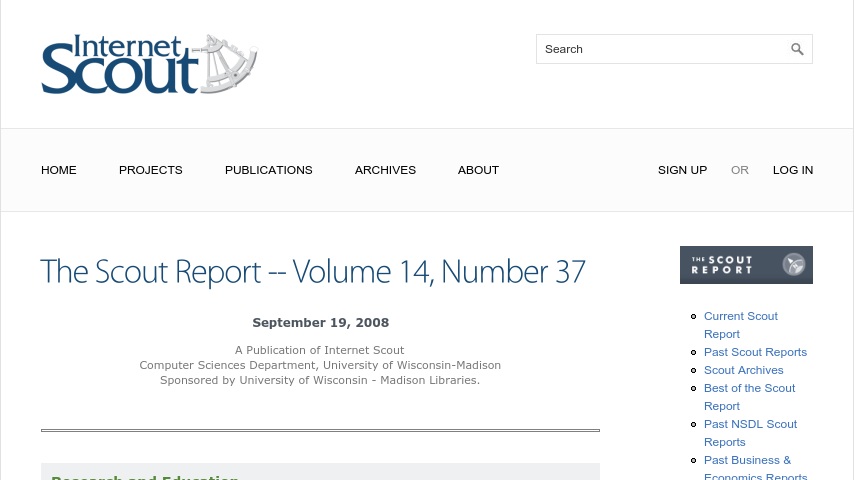