Sun and Surrealist paintings make for a pleasant cruise ship combination, but some are questioning the practices of one noted art auction house

Reviews - Sun and Surrealist paintings make for a pleasant cruise ship combination, but some are questioning the practices of one noted art auction house

Information - Sun and Surrealist paintings make for a pleasant cruise ship combination, but some are questioning the practices of one noted art auction house

Many Dali works are fakes, claims former art dealerhttp://www.cbc.ca/arts/artdesign/story/2008/06/11/dali-book-lauryssens.htmlPark West Gallery [Macromedia Flash Player]http://www.parkwestgallery.com/Judging the Authenticity of Prints by the Masters: A Primer for Collectorshttp://www.cycleback.com/printsexamination/Famous Fakeshttp://www.pbs.org/wgbh/nova/vinland/fakes.htmlMr. Picassoheadhttp://www.mrpicassohead.com/create.htmlIf you're cruising off the coast of Malta in a grand vessel, the last thing you might expect is the opportunity to purchase a Picasso, Rembrandt, or Dali. However, over the past two decades "fine art" actions have become a popular amusement and source of revenue on many of the major cruise lines. Unfortunately for Luis Maldonado, his auction house purchase didn't work out as he expected. On a recent cruise with his wife, Maldonado happened to stop by an art auction presented by the Park West art auction house, and feeling a bit intrigued he decided to take a look around. He heard the auctioneer singing the praises of two "museum quality" Picasso prints and a trio of Salvador Dali prints. Maldonado found himself drawn in and he purchased both sets at a price he was told was approximately 40 percent of their "appraised value". One can imagine his surprise when he returned home and found that the pieces were worth significantly less (which in itself might not be so surprising), but also that the works by Dali didn't contain an acceptable form of signature as indicated by Dali archivist and scholar Albert Field. Maldonado is not alone in his concern, it was recently announced that a Florida resident and a California resident filed class action lawsuits against Park West. They have accused the company of misrepresenting the value of its artwork and are seeking unspecified damages for unfair trade practices, breach of contract, and unjust enrichment. When asked about the lawsuits, Park West founder Albert Scaglione called them groundless, noting, "We've got over a million clients and we make an effort to satisfy every one of them." The first link leads to a solid piece from this Tuesday's New York Times which reports on Maldonado's experience, along with offering commentary from Park West owner Albert Scaglione, law enforcement officials, and art forgery experts. Moving on, the second link leads to a rather intriguing article about the former neighbor of Salvador Dali, Stans Lauryssens, who claims that Dali had his assistants forge his own distinctive signature thousands of times on various art works. The third link will take visitors to the homepage of the Park West Gallery, which claims to have "the largest collection of fine art in the world." Those persons who happen to have an Old Master print lying about will appreciate the fourth link, which contains "Judging the Authenticity of Prints by the Old Masters" by art historian David Rudd Cycleback. The fifth link leads to a delightful page that contains information about famous fakes of yore, including Shakespeare's "lost play" and the supposed autobiography of noted recluse and sometime filmmaker Howard Hughes. Finally, if you don't have enough change for a Picasso print of your own, you can always use the last link to make your very own Mr. Picassohead, complete with eyes, ears, eyebrows, and signature.
↓http://scout.wisc.edu/Reports/ScoutReport/2008/scout-080718 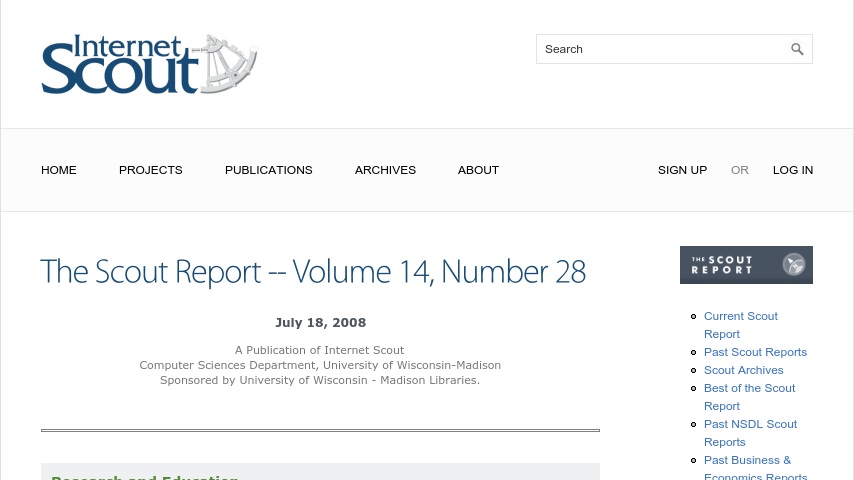