This section of Unit 1 - Atomic and Molecular Structure provides information about the periodic table, including its history as well as a discussion of periodic groupings and atomic numbers. This resource is part of the Chemistry collection, an open source California digital textbook plus supplementary resources.


The basis for the science of chemistry was the discovery and classification of elements. The first elements were known at the beginning of civilization. Iron tool, sulfur medicinal balms, gold jewelry, and carbon paints were all used in many ancient civilizations. When chemists started looking for elements some of them were easy to find. Yttrium, ytterbium, erbium, and terbium were all named by the Swedish research groups for the town of Ytterby, Sweden where the ore containing the new elements was mined. The elements of salt, sodium and chlorine where identified in 1807 and 1774 respectively. Cobalt was discovered in 1735, and oxygen in 1774. Aluminum was purified and identified in 1825 and phosphorous in 1669. Some elements have been difficult to isolate. Technium, in the middle of the periodic table, was finally characterized in 1937. Francium continues to be elusive but was purified in sufficient amounts to identify in 1939. And astatine at the bottom of the halogens was characterized from a small radioactive sample in 1940. We have been creating and identifying elements from 1945 when neptunium was created in California to present when a joint Russian and American group isolated 6 atoms of element 117 in 2010 (the last named element was copernicium, Cn, is element #112).

The periodic table is a list of all elements organized so that the atomic number increases from lowest number to highest number. The first 92 elements are created by natural events and the other elements (26 more at this time) are made by man. The list has rows called periods that stop when the next element has properties similar to the properties of the first column of elements. Each column is a group or a family. 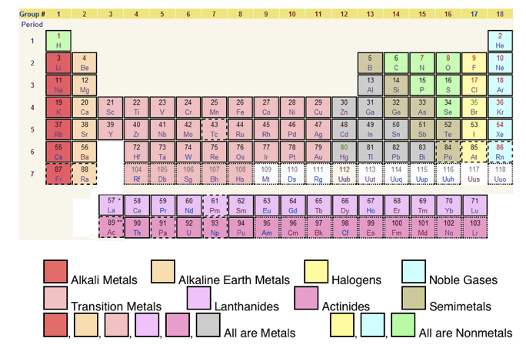 There are two broad groupings of elements that are separated on the periodic table. These are the metals and the nonmetals. Metals are on the left and extend from lithium, Li, down to francium, Fr, then across to the right to aluminum, Al, (not borium, B) to bismuth, Bi. The nonmetals are carbon, C, and the diagonal line to radon, Rn and all elements to the right of that diagonal line. Hydrogen is a nonmetal. This leaves a set of elements that have properties that are not fully metallic called semimetals (or metalloids): boron, B; silicon, Si; gallium, Ga; arsenic, As; antimony, Sb; tellurium, Te; and polonium, Po. Semimetals slightly conduct electricity and may be brittle and without luster.

Four groups on the periodic table have distinct names and distinct properties. The groups alkali metals, alkaline earth metals, halogens, and noble gases. When we understand the chemistry of one element in any of these groups then we know that the other members of the group have similar reactions and properties. (Recall groups are columns of elements.)

The first column of the periodic table is the alkali metals: lithium, Li; sodium, Na; potassium, K; rubidium, Rb; cesium, Cs; and francium, Fr. Alkali metals are soft metals that can be easily cut, have low melting points, have low densities (lithium, sodium, and potassium float on water), react with oxygen and water quickly. They form oxygen compounds in a 2 to 1 ratio, e.g., Na2O and K2O, and form chlorine compounds in a 1 to 1 ratios, e.g., NaCl and KCl (great video at http://www.open2.net/sciencetechnologynature/worldaroundus/akalimetals.html).

Note that hydrogen, H, is often placed in the same column but it is not an alkali metal, in fact, hydrogen is unique and is alone in its own family.

The second column of the periodic table is the alkaline earth metals: beryllium, Be; magnesium, Mg; calcium, Ca; strontium, Sr; barium, Ba; and radium, Ra. These metals have similar properties to alkali metals except they are harder, have higher melting points and densities, and react more slowly with oxygen and water. The most important change is the change in the ratio of compounds formed with oxygen and chlorine. With oxygen these metals form compounds with a 1 to 1 ratio, like MgO and CaO, and react with chlorine to form compounds with a 1 to 2 ratio, like MgCl2 and CaCl2.

The second to last column is the halogens: fluorine, F; chlorine, Cl; bromine, Br; iodine, I; and astatine, At. These are toxic, dangerous, and reactive substances (isolation of fluorine took the lives of several early experimenters). They are so reactive they are found in nature combined into a diatomic molecule such as F2, Cl2, Br2, and I2 (At is radioactive and is only characterized as atoms). Halogens are the only elements with -ine endings so they are easy to recognize). Halogens easily form gases. Fluorine and chlorine are gases at room temperature and bromine is a liquid (the only other liquid at room temperature is mercury, Hg). Iodine so easily forms a gas that even though it is a solid it will sublime (change from solid to gas) at room temperature. These elements are also commonly found in salts such as common table salt, NaCl, and ocean salts, KCl and MgCl2.

The last column is the noble gases: helium, He; neon, Ne; argon, Ar; krypton, Kr; xenon, Xe; and Radon, Rd. These are all gases nonreactive, hence their name referring to being too good to react. Recently, under unique conditions Kr, Xe, and Rd have formed stable compounds. The fact that they are gases and are not reactive meant that they were very hard to discover and isolate.

Some other group names are the transition metals which are the elements in the “middle” of the periodic table starting with scandium, Sc, (#21) across to zinc, Zn, and down to mercury, Hg, and Element 112 (copernicium).

Also two periods of elements separated from the other elements in most periodic tables are the lanthanoids and actinoids (commonly referred to as the lanthanides and actinides) that start at lanthium, La, (#57) . While these elements are commonly referred to as rare earth metals, they are actually rather common elements. Also Glenn Seaborg (who created several transuranic elements like plutonium and americium) suggested, much to the distress of his elders, that the family names be given for the periods not the groups, because he rightly pointed out that the properties of these elements were similar in the rows not the columns.

Numbers on the Periodic Table.

The periodic table is organized by increasing atomic number. Each element is different from its neighbor by the number of protons present in the nucleus. (We will learn about protons and neutrons in the Fundamental Particles section of the text). The atomic number is both an identifier for the element and also a count of the number of protons present in the nucleus. The second number commonly found on the periodic table is the atomic mass. This number is much easier to determine experimentally than the atomic number so it was originally used to determine the order of the elements. The atomic mass is an average mass of all the atoms in a sample and is essentially the sum of the two types of particles in the nucleus: protons and neutrons. (This last statement should be troublesome. How can iron, Fe, have particles that add up to 55.85 particles? This has to do with how the average of masses are determined. When we get to Isotopes this will be dealt with in more detail.)

A Final Word about the Periodic Table

The periodic table is one of the most valuable tools in chemistry; in fact, there is another section coming up soon on periodic trends. The fact that the elements that make up all things can be placed in an organized pattern has helped scientists make sense of the chemistry and properties of substances. Furthermore, the organization of the table is based on the nature of the atom and the particles that make it up. As we go through the different topics use the periodic table to recognize patterns in properties and reactions to make your study of chemistry more efficient and complete.