Sunrise over the ocean.

The Earth rotates with a constant speed, rotating once fully around its axis in 24 hours, or one day. During this time, the sun is roughly in the same location in space, but standing on the surface of the Earth we see it move across our sky, rising in the east and setting in the west. This “movement” of the Sun around the Earth gives us night and day, and is the basis for counting time. As the Sun moves across Canada, eastern provinces such as Newfoundland and Labrador will see the sunrise first, while British Columbia on the west coast will see the sunrise a few hours later. 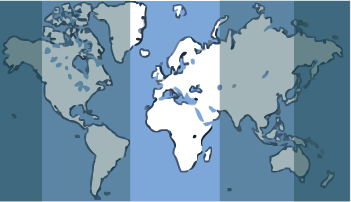 As the Earth turns, parts of the planet experience day
while other parts experience night

Because noon in Newfoundland occurs significantly earlier than noon in British Columbia, time zones were created to set standard time for each part of the world, dividing the Earth into 24 sections.

Table 1: Time Around the World
{image:TimeZoneMap2004_sm.jpg| | | |center">
Time Zones displayed on a map of the Earth.

The Earth’s orbit around the sun isn’t exactly one year! It actually takes 365.25 days for the Earth to get around the Sun. The extra 0.25 days combine to make to one full ‘extra’ day over 4 years. This is why a leap year (with 366 days) happens every 4 years!
Canadian Contributions

It was a Canadian named Sir Sanford Fleming (1827-1915) who invented time zones in the 1870s. Before this, each city decided its own time. This caused much confusion as people began traveling on trains between cities. Fleming, working as a railway engineer, proposed time zones as a method of organizing time so everyone would be synchronized. Full international standards of time were accepted in 1884 at an international conference in Washington D.C. Fleming was born in Scotland, but immigrated to Canada in 1845.

While the Earth is rotating on its axis, our planet is also revolving, or orbiting, around the Sun. This journey around the Sun takes approximately 365 days, or one year. The notion of breaking the year down into months came from observing the lunar cycle – the length of time it takes to go from one new Moon to the next new Moon. A typical lunar cycle takes 29.5 days, close to our average month length of 30.4 days. Some cultures, such as the Chinese, continue to use lunar calendars for various purposes.


The Earth’s orbital path around the Sun is not perfectly circular, but slightly elliptical, bringing us closer to the Sun for part of the year, and farther from the Sun for the rest of the year. It is a common misconception that people think that during winter the Earth is further away from the Sun, giving us colder weather. This is not true, and in fact North America is slightly closer to the Sun during our winter months – the changes in the Earth’s distance to the Sun are not significant enough to cause any such seasonal changes. 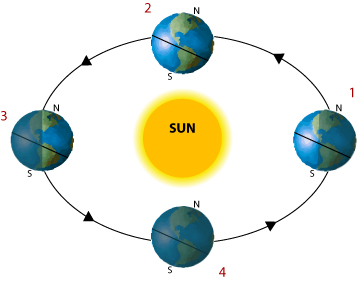 In position 1, the northern hemisphere is tilted away from the Sun, receiving less sunlight. This is our winter season.

In position 3, the northern hemisphere is tilted toward the Sun, resulting in warmer weather in the summer.

Positions 2 and 4 show sunlight hitting the northern and southern hemispheres equally. This is our spring and fall, respectively.

The positions of the earth throughout the year.
Canadian Contributions

Perhaps the most noticeable effects of astronomy in Canada are the seasons: few other countries can boast an average temperature change of about -30?C to 30?C throughout the course of the year!