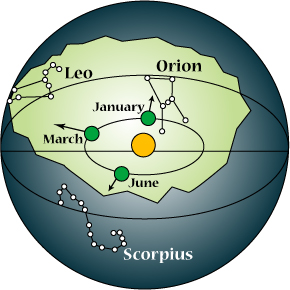 Depending on the Earth’s position relative to the Sun, different
constellations are seen at different times of the year.

To locate Polaris, one first needs to find Ursa Major, or “Big Bear,” which is a polar constellation. Seven stars of Ursa Major are brighter than the rest, and are recognized by most as the Big Dipper. The two stars at the end of the “pan” part of the dipper point toward Polaris as you move from the bottom of the pan to the top. Polaris itself forms part of the Little Dipper, which is much dimmer, and only visible in very dark skies. The two Big Dipper stars which point to Polaris are commonly called “Pointer Stars.” 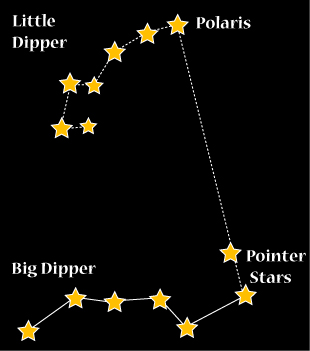 By locating the Pointer Stars on the Big Dipper, one can
easily find Polaris, and thus a northerly direction!

Canadian Contributions
Though most Native Canadian cultures called the Ursa Major constellation “The Bear,” the Ojibwe nation called it the Great Fisher. Legend has it that the Fisher, along with other winter animals, tried to steal warm weather from the summer animals. While fleeing with the bag of summer, Fisher was struck by a hunter’s arrow and was flung high into the sky. The Creator recognized that the Fisher was only trying to protect his fellow winter animals from starvation and cold, so he placed Fisher among the stars. The Fisher was then visible all year long, symbolizing the harmony between the seasons. (http://www.virtualmuseum.ca)


Finally, it is worth mentioning that though constellations appear to be stars clustered together, they are often, in fact, very far away from each other. From our vantage point on Earth, we cannot distinguish the “depth” of each star in the sky, and as a result, stars that lie in the same direction from the Earth may look as though they are all the same distance from the Earth – on a distant celestial sphere.

Stars which appear to be close together in a constellation are usually
quite far away from each other, when we take depth into account.