In Collections
Objectives
The planets are some of the easiest objects to find in the night sky. They are often brighter than the surrounding stars, and also display some colour most of the time.
The brightest star in the night sky is Sirius. Five of the seven planets (Earth is not included, since we cannot see it in the night sky!) are brighter than this star, and are easily visible with the unaided eye. The other two, Uranus and Neptune, are the furthest away and therefore the most difficult to see, but they are visible with a good pair of binoculars.
The brightest object in the night sky, besides the Moon, is Venus. It appears as a brilliant white colour. Jupiter is the next brightest and it also is a bright white colour. Mars is usually the next brightest, similar in brightness to the brightest stars It appears as an orange-brownish colour, giving it the nickname the ‘red’ planet. Saturn is about equal to the brightness of a star and appears yellowish. Mercury is the smallest planet but is still often as bright as the stars in the Big Dipper. 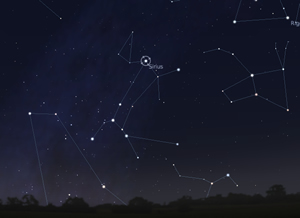 The brightness of the planet varies tremendously depending on how far away the planet is from the Earth. The Earth goes around the Sun almost twice for each orbit that Mars makes, therefore there are times when the Earth is passing Mars and they are very close, and times when the Earth and Mars are on the opposite sides of the Sun. This occurs in various combinations for each of the planets and causes differences in brightness when seen from the Earth. Remember that planets don’t produce their own light but must rather reflect the light from the Sun. Therefore the reflectivity of the surface or cloud cover of the planet (also called the albedo) also dictates how bright a planet will appear.
The relative position of the planets around the Sun also means that planets are not always visible in the night sky. When Mars is on the opposite side of the Sun (which only occurs during the day), to look at Mars you need to look towards the Sun. Therefore, we can only see the planets in the night sky when they are on our side of Sun. When a planet is on the opposite side of the Sun from the Earth it is said to be in opposition.

Did you know? There is an easy way to tell a planet from a star in the night sky. Starlight is disturbed slightly as it passes through the Earth’s atmosphere, causing the star to ‘twinkle’. Planets are much closer though, and have enough light entering the atmosphere that they will not appear to twinkle.
Planets are orbiting around the Sun just as the Earth is moving. So planets move across the night sky unlike the stationary stars on the “celestial sphere.” Also, not only does the number of planets that are visible on any given night change throughout the year, but their location in the sky from year to year also changes based on their relative positions in their orbits. Just because you were able to see Venus above the western horizon last June doesn’t mean you’ll be able to see it there again next year! You will need to check with some astronomical observing resources to find out which planets are visible on any given night.
There is one further point that will help you find planets: because the solar system is flat, all the planets orbit across the same line through night sky: the ecliptic. The Moon also moves across this line, through the Milky Way, making it easier to find the planets despite their movement.
A conjunction occurs when planets are observed close together along the ecliptic. There are rare times when all five of the brightest planets are visible at the same time in the night sky. The last of these occurred in April/May of 2002.
Each of the planets has its own interesting characteristics to observe. Mercury and Venus are in close orbit with the Sun. This means that they are always fairly close to the Sun in the sky as viewed from Earth. They can only be seen during dusk or dawn, while the sky is still dark and the Sun is just below the horizon. With a good telescope, you can see phases of Venus and Mercury, much like the phases of the Moon, depending on where they are relative to the Earth.
In rare circumstances, Mercury or Venus will pass in between the Sun and the Earth. With a solar filter placed on a telescope, you can see this little eclipse as a black dot on the surface of the Sun. When a planet moves across the Sun and is visible from Earth, it is known as a transition.
Though Jupiter has over 20 moons orbiting it, only the four largest moons are visible through a telescope or a good pair of binoculars. With a good quality telescope you may also be able to see the giant storm on Jupiter, also known as the Great Red Spot, and some of the cloud bands of Jupiter’s atmosphere. Saturn’s rings are also visible in wonderful detail through a good telescope, as are its cloud bands, though not as clearly visible as Jupiter’s.
Because of Mars’s small albedo, distance from the Sun and smaller size, it is harder to see details of the red planet. Binoculars will show its trademark reddish colour, but it takes a good telescope to be able to see features such as the polar ice caps.

Pictured above: Venus, Jupiter and Mercury in conjunction. Venus is the bright dot in the centre, with Jupiter to the left above it. Mercury is just barely seen in the twilight. The line connecting the planets is the plane of the solar system, and is called the ecliptic.
Did you know?
Venus is often referred to as the Morning or Evening Star, even though it is not a star at all! This is due to its brightness, easily outshining other stars when it is up.