Objectives Light is an amazing thing. Scientists are still struggling to understand the nature of light, and most people don’t realize how complex it is, even though they use it everyday. If light were alive, it’s “life” might look something like this: light is produced by a source, travels in a straight line, sometimes bouncing or bending depending on what it runs into, and eventually is absorbed by something. In our everyday life, light typically manifests itself in one of these forms: 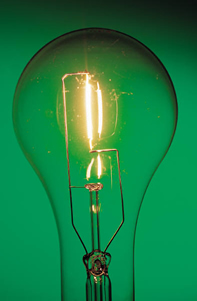 Incandescent light bulb.
In both cases the light entering our eyes allows us to see either its source, or what it has most recently bounced off of. For instance, the light that bounces off the tree allows us to see the shape and colors of the tree. Color is one of the main characteristics of light. The sun produces what is called ‘white’ light. This means that all the colours of the rainbow are present at the same time. If none of the colors were present then there would be no light, and hence it would be black! So when sunlight hits something like a tree and bounces off of it to arrive in our eyes, there is a actually number of things happening to the light. Some of the sunlight is absorbed by the tree, giving it warmth and energy. Some of the light is reflected into our eyes so we can see the tree. This would be green (yellow + blue) light, reflected off the leaves, and a combination of colours off the trunk to make the bark look brown. This means that when we say that the chlorophyll in a leaf is ‘green’ what we are actually saying is that it reflects primarily green light. Whatever colours are not reflected, are absorbed. The range of colours that the human eye can see is called the visible spectrum of light. In fact, it is just a small piece of the whole spectrum of light. One way to describe to light is as an electromagnetic wave. This is similar to a water wave with crests and troughs and a wavelength. A wavelength is the length of one complete cycle of a wave, often measured from the top of one crest to the top of the next. 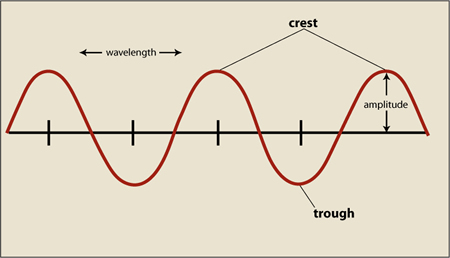 A basic diagram of a wave.
Did you know? The light from the Sun is not pure white light – an equal representation of all the colours of the rainbow. The outer layers of the Sun contain hydrogen and a few other gases that absorb some wavelengths of light. Each element absorbs different patterns of wavelengths. These appear as black lines or ‘missing parts’ of the rainbow of light from the Sun. This called an absorption spectra and it is different for each star depending on the composition of its outer layers. By analyzing the light coming from other stars astronomers are able to determine some of the elements that make up the star. Light can be divided up into different types depending on the length of its wavelength. Different colours have different wavelengths. Red light has a wavelength of about 700 nanometres [nm] (that’s 0.00007cm), while violet light has a wavelength of about 400nm (0.00004cm). But in fact light can wavelengths can exist as long as 1,000,000,000m (or 1Gm=1 Gigametre) and as short as 0.000,000,000,000,01m (or 10fm=10 femtometres.) There is a huge range! This gives us the full spectrum of light. We generally divide light into 7 different ranges. This is shown below in Table 1 and in the image below. It might surprise you to know that all of these types of waves are essentially the same thing – it is only the length of the waves that makes them differ from each other. 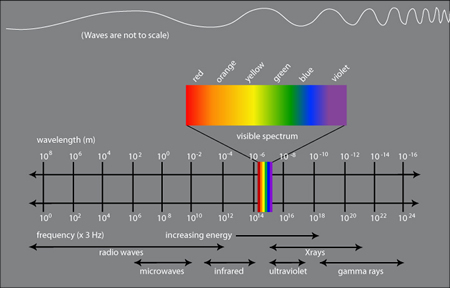 The Electromagnetic Spectrum of Light. Note that there are not
clear dividing lines between the types of light, but their ranges overlap.

Table 1 also lists the frequency and energy level of the various kinds of light. Frequency is defined as the number of wave cycles that occur in one second. Imagine an oscillating pendulum that swings back and forth twice every second. This would mean it has a frequency of 2 cycles per second, or Hertz (Hz). Radio waves have the lowest frequencies of the various types of light but they can still complete a million full cycles every second! This extreme oscillating movement is a good example to help you imagine how energy is related to light. A wave that oscillates a million, million times a second has more energy than one that only oscillates 10 times a second. The different kinds of light have given rise to various fields and developments in astronomy, but before we address these there are a few more basic elements to discuss. Did you know? The speed of light is now what defines the length of 1 metre. Originally it was calculated as a 1/10,000,000 of the distance from the equator to the North Pole through Paris. However, as scientists were able to produce more accurate measurements of the speed of light, it was decided that this fundamental value in the universe is a better standard to use than the size of the Earth. In 1983, it was decided to fix the value of the speed of light at 299,792,458 m/s and then adjust the length of the metre to exactly match this quantity. The speed of light, written as c (as in Einstein’s famous equation E=mc2), is one of the most important values in astronomy. The speed of light in a vacuum is: c = 299,792,458 metres/second, where a vacuum is a space completely devoid of matter. This is the fastest anything can travel in the universe. Even so, it still takes millions of years for light to reach us from the nearest galaxy. This makes it difficult for humans to consider traveling to another solar system, as the nearest star, Proxima Centauri, is still 4.22 light years away. If we could somehow travel as fast as the speed of light, it would take us 4.22 years to get there. 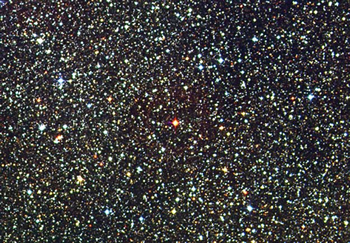 Earth’s closest star, after the Sun, is Proxima Centauri, is seen as the red star
in the centre of this photo UK Schmidt Telescope. It is only visible by
telescope, primarily in the Southern Hemisphere.
The various types of light offer many advantages for astronomers. By observing different types they can learn different qualities of the object observed. Below is an example of this using the Sun, as observed by the SOHO Space Telescope.