Unit 3 - Lesson 2: The Movement of Light

Objectives Light travels in a straight line at a speed of 299,792,458 m/s. This is true most of the time. There are times when this rule is bent, or perhaps reflected! 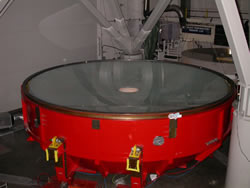 The first 8.4-meter (28-foot) primary
mirror in the telescope cell
Large Binocular Telescope
Reflection Light travels in a straight line and yet there are times when light is not shining directly through the windows of your house during the day and the house is still very well lit. This is because light will bounce off of most objects. This was described in the Module 3, Tutorial 1 when we discussed how we see colour. Reflection allows the light from the Sun to arrive at the Earth and bounce around, illuminating everything around us. A fun way to test this is to point your television remote control at different walls in your TV room. The infrared light from the remote will bounce off the walls and eventually still reach your TV, as long as the original signal was strong enough. There is a rule of reflection that deserves to be mentioned here: the Law of Reflection. This states that light will reflect off of an object with the exact same angle with which it hits the object, or more specifically: the angle of incidence (incoming light) equals the angle of reflection (reflected light). Note that these angles are measured from a line that is perpendicular to the surface of the object, called the normal. 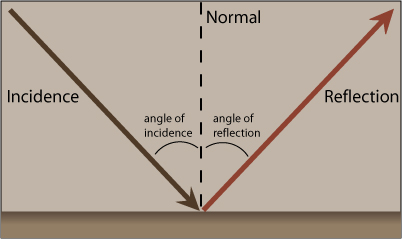 The Law of Reflection
This is similar to many other objects that bounce, such as billiard balls. When a ball collides with the side of the billiard table it bounces back at an equal angle to which it arrives. Refraction The path of light will also bend sometimes. This is called refraction. This most often occurs as light moves from one medium or material, to another, such as moving from air into water. The water is more optically dense than the air – this means that in the water the light actually travels slightly slower. This ‘drag’ on the speed of the light causes the path of the light to bend as it moves from the air to the water. 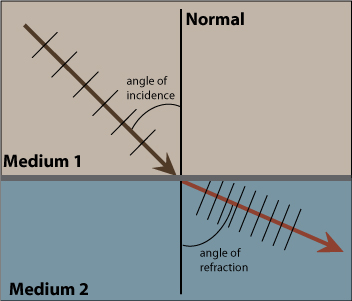 The Law of Refraction
The Law of Refraction also exists, but it is more complex than the Law of Reflection. The angle of refraction, or how much the light bends, depends on the relative optical densities of the two materials. If you would like to learn more, research ‘Snell’s Law of Refraction’. There are many everyday examples of the refraction of light, such as looking into a fish aquarium. Test this by sticking a ruler partially into a glass of water. There should be an angle at which the ruler looks bent. The most famous example of refraction is the mirage, although in these cases the light is not moving from one medium to another. For a mirage to occur, the air near the surface of the Earth must be hotter than the air just slightly above the surface. This difference in temperature creates a slightly different optical density between the two layers of air and refraction occurs. Let’s examine the situation in a desert where mysterious pools of water appear for the thirsty travelers. The light is coming down to the Earth’s surface at a severe angle is actually bent by the different layers of air, curving upwards to arrive at our eyes. When this light arrives at our eyes, we see the bright blue sky, but this blue area appears on the surface of the Earth. This gives the illusion of light bouncing off water on the surface of the sand. 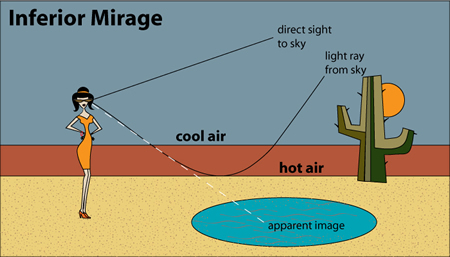 How mirages work.
Bending of light rays such as in mirages is also important for astronomy. However in space it is not different media that usually refract light, but gravity pulling on the light. Objects with extremely large masses can bend the path of light as it travels through space. This is one way that astronomers can sometimes detect the presence of a black hole – perhaps one of the only objects massive enough to create this effect.