Objectives Whenever we look up at the night sky, we see a great many stars. However, the number of stars that we can see depends on where we are standing. On a dark night when you are far away from other sources of light, you can easily see hundreds of stars and galaxies in the night sky. However, when you are in the city amongst many other lights, your eyes adjust to this higher level of light and you are unable to see as many stars. In fact there are billions of stars up in the night sky, but our eyes are not sensitive enough to see the light from them all. This is due to two reasons: they are too small to see because of their distance from the Earth, and/or they are too faint. This is why a telescope is the primary tool for astronomers. A telescope does two things. The first is the most obvious: it magnifies. A telescope will magnify the images in the sky so they appear much larger and are easier to see. A typical backyard telescope will magnify objects in the sky at least 10 times, but this is not the most important aspect of the telescope. The second main function of a telescope is to collect lots of light. To able to see an object, we need to have a ray of light come from that object and arrive in our eyes. Generally, the more light that arrives at our eyes, the more clearly we can see the object. However, the opening in the iris of our eyes is only about half a centimeter across at its largest. This limits how much light can enter our eyes. A telescope has a much larger opening at the end of it to allow a lot of light to enter the telescope. The light then becomes focused to enter the small iris of our eyes. This turns a typically faint object in the sky into a brighter one. These two aspects are the fundamentals of telescopes, but how the two parts are combined differs between various kinds of telescopes. 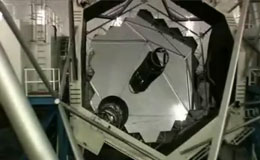 The primary mirror is composed of 36
hexagonal segments - Keck 2 Telescope
In general there are two main types of telescopes: the reflecting telescope and the refracting telescope. The refracting telescope was created first by Galileo Galilei in the 17th Century. It consists of a series of lenses that refract (bend) the light towards a focus point that the observer can use to see an object. It is effective but relies heavily on the quality of the lenses. One disadvantage of refracting telescopes is that a larger lens and a longer telescope tube is needed in order to have a larger aperture (to let in the most light possible). This makes large-aperture refracting telescopes impractical.
The refracting telescope is also often called the Newtonian telescope. It works on a principle that involves mirrors instead of lenses. The light enters the front end of the telescope, reflects off a mirror at the back end of the telescope which in turns focuses the light towards a second mirror near the front end, then reflects the light out the side of the telescope and into your eyes. Typically, the refracting telescope is more limited in its effectiveness. Almost all of the telescopes used today in major observatories are variations on the reflecting telescope. However, all the variations of spy glasses, such as binoculars, use refraction to focus light for the viewer. There are many variations on the reflecting telescope depending on how the light is reflected and where it emerges from the telescope. One of these, the Maksutov-Cassegrain, has also become somewhat common among backyard telescopes. Before we move on to astronomical research and large scale telescopes, there are a few things that need mentioning regarding backyard telescopes. If you are considering purchasing a telescope to observe the stars in your own backyard, please take these few points into consideration. Most telescopes you can buy, even those at local hardware stores, have decent optical qualities. However, they are not overly effective for other reasons. Often the stand is unsteady, the mount does not turn fluidly, or the finderscope on the side is difficult to use. Do your research fairly thoroughly before purchasing a telescope. A good pair of binoculars is often a better start than a cheap telescope. High Powered Telescopes The telescopes used by professional astronomers are most often a large step above those used by the backyard astronomer. Part of this is because they are typically ‘above’ where your backyard is located: on mountaintops! 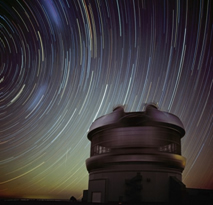 The night sky rotates above the Gemini South Observatory that
Canada uses for astronomical research in Chile, in this lapse-time exposure.
An identical observatory is located in Hawaii for observing the northern sky.
There are two reasons why it is useful to put telescopes on the top of mountains. Firstly, if you want to see viewing the night sky, it must be requires a clear night. Clouds often get inobstruct the way and prohibit the viewing that you want to do. There are manyview . Many mountains whose have peaks are above the level of clouds, providing the observatory with clear skies almost 365 days a year.
The second reason is to get a clear picture. The atmosphere above the Earth is constantly moving around and theis this motion will cause disturbances in the light arriving from distant stars. When you buildBuilding a telescope on top a of a tall mountain, you can circumvent this problem significantly, because you are it is above most of the atmosphere that causes the disruptions. A third possible reason is that there are very few other people on top of mountains, so it is usually dark and you don’t have to ask your neighbours to turn off the exteriorwithout the interference of neighboring lights so you can see better! Canada participates in active research at some of the world’s largest optical telescopes, including the Canada-France-Hawaii telescope in Mauna Kea, Hawaii, USA, and the Gemini twin telescopes in Hilo, Hawaii, USA and La Serena, Chile. Canadian Contributions The largest active reflecting telescope in Canada is the David Dunlap Observatory, located north of Toronto and operated by the University of Toronto. It was built in 1935 and houses a 1.88m telescope that was the second largest in the world when it was built. It is still used for research and the training of astronomers. The largest telescope in Canada is the Large Zenith Telescope in British Columbia. This unusual telescope uses spinning liquid mercury as a mirror and can only look straight up, that is, at the zenith. 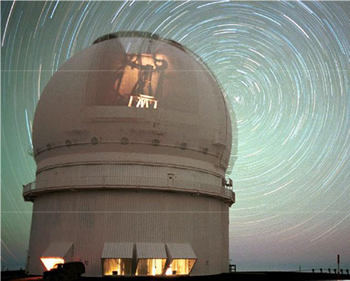 The night sky rotates above the Gemini South Observatory that
Canada uses for astronomical research in Chile, in this lapse-time exposure.
An identical observatory is located in Hawaii for observing the northern sky.
Did you know?
The largest refracting telescope ever made and used in an observatory was built for the Yerkes Observatory at the University of Chicago. It was created in 1897, and measures 102cm across the top opening (or objective lens) of the telescope. The observatory is still preserved and used for research and educational activities.
Did you know? Currently the largest single optical telescope in the world is the South-African Large Telescope with a reflecting surface of diameter 11.0m. It was built in 2005 and its mirror consists of a ‘mosaic’ mirror made of multiple smaller mirrors that act as a single larger one. The largest single piece mirror telescope is the Subaru (NLT) 8.3m telescope operated by Japan, on Mauna Kea in Hawaii, constructed in 1999.