Objectives No account of modern-day telescopes would be complete without mentioning the Hubble Space Telescope. This telescope was put into orbit in 1990, but its performance was initially inhibited by a faulty mirror until it was fixed in 1993. Since then it has changed the face of astronomy and ushered in discovery after discovery. The major advantage for Hubble, and other space telescopes, is that it is above the atmosphere of the Earth. This means that there are no aberration due to atmospheric disturbances, and there is no stray light coming from the neighbours. The vacuum of space means that telescope maintenance will never include dusting or cleaning the mirror. Also it can perform observations 24 hours a day on a single object in the sky since it is not tied down to the rotating surface of the planet. Lastly, Hubble is built to able to observe infrared, visible and ultraviolet light. It is a very flexible and powerful instrument, and is currently the only space telescope which can observe in the visible spectrum. 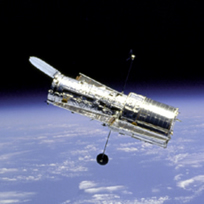 The Hubble Space Telescope
photographed from onboard the
Space Shuttle Discovery.

The ability to observe in the ultraviolet part of the spectrum is particularly useful because ground based telescopes cannot. Most of the ultra-violet light that falls on the Earth is blocked by the atmosphere. 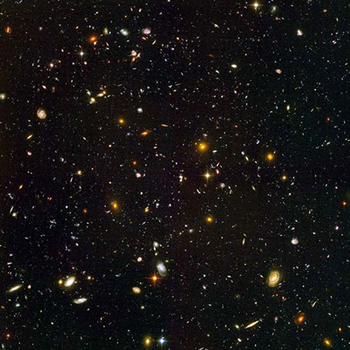 One of the most interesting achievements of Hubble has been to record the Ultra-deep Field image which reveals the most detailed optical view of a piece of the night sky ever recorded. This was achieved by having Hubble point itself at a same, tiny part of the sky for almost 3 months continually. This resulted in the most accurate and thorough look at a part of the night sky ever. Only the objects with pointed crosses on them are single stars. It is estimated that there are over 10,000 galaxies in this image! This is particularly amazing considering it represents an image that is less than one tenth the size of the Moon in the night sky.

Unfortunately, Hubble is in trouble again these days. Systems have broken down and threaten to restrict its performance if these problems continue. With the Columbia shuttle disaster in 2003, the service missions to the telescope have been compromised. There has been one final service scheduled by NASA to be carried out no later than May 2008. Even so, the Hubble Space Telescope has already exceeded the majority of astronomers’ expectations.
There are in fact many space telescopes in orbit these days, of which Hubble is the most powerful. The other telescopes have been put in orbit by NASA, the European Space Agency and the Japanese Space Agency, to perform more specialized observations. They fall into two general categories: those which have missions to survey the entire sky, and those that function as observatories and focus on particular parts of the sky. Here are a few examples:

Infrared image of the Andromeda Galaxy from the Spitzer Space
Telescope. This image highlights the old stars in the galaxy in the blue
colour, while the red is cosmic dust. Companion galaxies are also visible
above and below Andromeda.