Unit 4 - Lesson 1: The Effect of the Moon on the Earth

Everyone has heard of gravity – the attractive force that keeps us on the planet instead of simply floating off into space. However its exact nature is yet to be determined, and is the focus of many scientific investigations. What we do know, is that any object which has mass (the Sun, the Earth, yourself, the family pet, a tiny ant, etc.) exerts gravity on everything around it. The larger the mass, the greater the force of gravity. So in effect, while the Earth’s gravity pulls you toward the planet, you are also pulling the Earth toward you! Since you are much less massive than the Earth, the effect of the Earth pulling on you is much more noticeable than the effect of you pulling on the Earth.

The force of gravity between two objects also depends on how close those objects are to each other. The closer they are, the stronger the force. As one object is pulled farther away from another, the strength of the force decreases as the inverse of the distance between them, squared. This is why we as humans feel a stronger attraction to the Earth than to the Sun. Even though the Sun is more massive than the Earth, we are much closer to the Earth, and as a result, don’t notice the pull of the Sun on us.

In space, with its objects of immense mass, gravity runs the show. The Sun, being more massive than the planets, keeps all of them in orbit. The balance of gravitational forces between the Sun and Jupiter is what keeps the thousands of asteroids within the asteroid belt. Apart from the Sun, there is only one object close to the Earth which exerts a large enough force of gravity on the planet to affect our lives: the Moon. 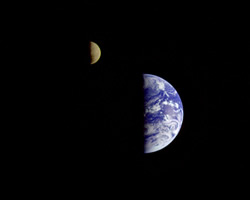 
It is the Earth’s gravity that keeps the Moon in orbit around it, but the Moon also pulls back on the planet, and on everything on the Earth. Since the Moon is less massive than the Earth, and much further from us than the Earth, we do not notice its effect on us personally (the force of the Earth’s gravity on a human being approximately 300,000 times stronger than that of the Moon!). But there is something on the Earth which does feel the pull of the Moon – something which covers most of the Earth’s surface, and is fluid enough to noticeably change its shape due to this extra pull: the world’s oceans.

The Moon’s gravity pull is the strongest on the side of the Earth closest to it. Assume that the Moon is over the Atlantic Ocean. The Moon’s gravity pulls the Atlantic Ocean toward it, creating a high tide. The middle of the ocean makes itself “higher” by draining water from parts of the planet not feeling the effects of the Moon, in our case from Eastern Canada or the Mediterranean. The decrease in water levels in these regions creates a low tide.


At the same time, another high tide is created on the exact opposite side of the Earth. Recall that the strength of the force of gravity depends on the distance between two objects. The Moon exerts a strong force on the Atlantic Ocean, creating a high tide, but also pulls a little less strongly on the centre of the Earth, pulling the Earth away from water on the opposite side of the planet. This creates a bulge of water in the Pacific Ocean similar to a high tide. This water in the Pacific Ocean does not feel the effects of the Moon strongly, and is therefore not pulled toward it like the Atlantic Ocean is. The water that is “left behind” by the Earth as it is drawn to the Moon is called an indirect high tide. 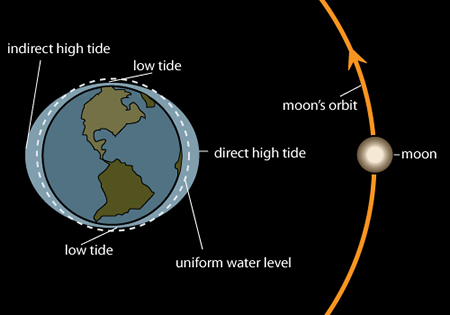 The Moon’s gravity pulls the ocean water towards it as it moves around
the Earth, creating high and low tides

Though not as well known as the ocean tides, the Earth also experiences solid earth tidal bulges when the Moon is directly over land. These bulges of the Earth’s crust can sometimes measure 10 centimetres in height! We do not feel these, however, due to the fluidity of the Earth’s mantle.


The Sun also has an effect on the oceans, though not nearly as strong an effect as the Moon, due to its distance. However, during a New Moon, when the Sun and the Moon are in the same direction when viewed from Earth, high tide becomes a little higher than usual due to the extra pull of the Sun. This particular tide is called a spring tide. This also occurs when the indirect tide is in the same direction as the Sun, meaning that the Full Moon is in the opposite direction of the Sun when viewed from the Earth. Spring tides occur roughly twice a month.

Spring Tides
Also, when the Moon is in its First Quarter or Last Quarter phases, and therefore ninety degrees to the position of the Sun relative to the Earth, the Sun’s gravity somewhat cancels out the Moon’s pull on the tides. This creates high tides which are lower than usual, and low tides which are higher than usual. This tide is called a neap tide, and also occurs approximately twice a month. For more information on the phases of the Moon, see Module 4, Tutorial 3.

The Bay of Fundy, between New Brunswick and Nova Scotia, is home to the world’s largest tides. While the difference between high tide and low tide on the open ocean is an average of one meter, the difference between high and low tide in the Bay of Fundy can be as much as 20 metres! This is due primarily to the Bay’s long, V-shape, with the wide end of the V connecting the Bay with the Atlantic Ocean.

If the Moon were stationary in the sky, high tide would occur every 12 hours – once when a particular point faced the Moon, and again half the Earth’s rotation later when it would feel the indirect high tide. In reality, high tide occurs roughly every 12 hours and 24 minutes: the extra 24 minutes is due to the fact that the Moon is also revolving around the Earth, therefore changing its position in the sky.


Over time, the Moon’s continual pull on the Earth as it rotates has, and will have, some significant effects. Because the Moon is traveling around the Earth more slowly than the Earth is rotating, its gravity is essentially dragging the surface of the Earth, causing the Earth’s rotation to slow down. In effect, our days are hence getting longer by 0.0016 seconds per century, meaning that just before the dinosaurs became extinct approximately 65 million years ago, they enjoyed days which were about 2 minutes shorter than our current days!


As a counter-effect of this dragging, the Moon is also moving away from the Earth at a rate of 3 to 4 centimetres per year. This is continually measured by reflecting laser beams off mirrors on the surface of the Moon, left there by Apollo astronauts during the Moon landings, and measuring the time it takes the laser beams to be reflected back to the Earth. Using our dinosaur analogy, the Moon would have been almost 2300 km closer to the Earth, resulting in much larger tides.