This lesson is part of the Athabasca University Astronomy 230: Northern Lights, Northern Skies course. In this lesson, you will learn how to distinguish between a solar eclipse and a lunar eclipse, and how to describe why safety precautions must be taken when observing a solar eclipse or transit. 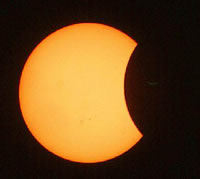 Partial Solar Eclipse
To eclipse something, is to cause a partial or total obscuring of an object. In astronomical terms, our “objects” are the Sun, Moon and Earth. This gives us two kinds of eclipses visible from the Earth: solar eclipses, where the Sun is blocked, and lunar eclipses where the Moon is blocked.

A solar eclipse occurs when the Moon comes exactly between the Sun's rays and the Earth, blocking the Sun and creating a period of darkness on the Earth. The Moon actually comes close to blocking the Sun once every 28 days, during a New Moon (see Module 4, Tutorial 3), but not quite. This is due to the Moon’s orbit being tilted about 5? to the ecliptic, meaning the Moon often passes just north or just south of the Sun, without blocking it. When the Sun and the Moon line up perfectly, though, a total eclipse occurs, where the Sun is completely blocked from our view. Total solar eclipses happen roughly once or twice a year, and offer spectacular sights: with the disk of the Sun completely blocked, astronomers can see the halo of gas surrounding the Sun called the corona. 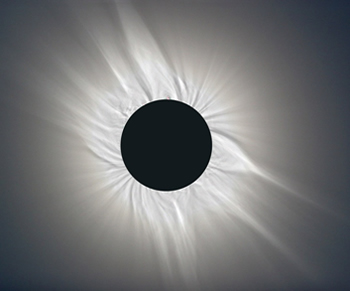 Total solar eclipse as seen from Turkey, March 29, 2006. The Moon
perfectly blocks the disk of the Sun, allowing the corona to be viewed.
Credit & Copyright: Koen van Gorp

Essentially what occurs is that the Moon is casting a shadow on a part of the Earth. Since the moon is small compared to the Earth the shadow only covers a small part of the Earth. This makes total solar eclipses visible only from specific locations on the Earth, depending how the Moon lines up with the Sun. These locations vary from eclipse to eclipse; Canada will see its next total solar eclipse in the year 2024. From other locations on Earth, the Moon only covers part of the Sun, and a partial eclipse occurs. During a partial eclipse, part of the Sun’s disk remains visible at all times. 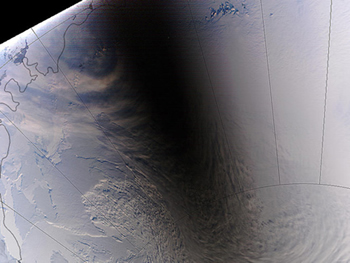 The shadow of the moon on the Earth during an eclipse. The latitude
and longitude lines are added for reference. A total solar eclipse would
only be visible if you are standing within the darkest part of the shadow.

A third type of solar eclipse, called an annular eclipse, occurs when the Moon is at apogee – the point in its orbit where it is the furthest from the Sun (see Module 4, Tutorial 1). Because it is further from the Earth, the Moon appears to be smaller, and hence doesn’t cover he entire disk of the Sun. As a result, at the moment of greatest eclipse the Moon covers the centre of the Sun, and is surrounded by a ring of sunlight. 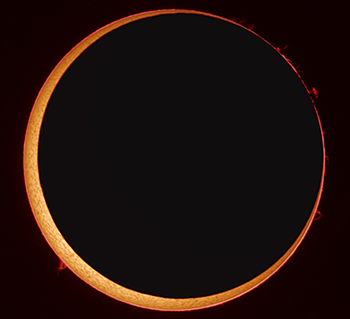 When the Moon lines up exactly with the Sun and only blocks part of it,
the result is an annular eclipse. This image was taken during the 2005
solar eclipse as seen from Spain.
Did you know?
We live in a very fortunate time, in terms of viewing solar eclipses. The diameter of the Sun is approximately 400 times larger than the Moon, but the Moon is about 400 times closer to the Earth than the Sun, which means that during a total eclipse, the Moon perfectly blocks the disk of the Sun. As the Moon moves further away from the Earth (see Module 4, Tutorial 1), generations far in the future will only see the Moon cover most of the Sun during a total eclipse

Canadian Contributions It was the sight of a total solar eclipse in 1925 which helped convince renowned Canadian astronomer Dr. Helen Sawyer-Hogg to pursue a career in astronomy. Dr. Sawyer-Hogg was quoted as later saying, about the eclipse, “the glory of the spectacle seems to have tied me to astronomy for life, despite my horribly cold feet as we stood almost knee deep in the snow.” She became a teaching assistant at the University of Toronto in 1936, and began teaching there in 1941, eventually becoming a full professor in 1956. Dr. Sawyer-Hogg was known for her research on variable stars in globular clusters. She discovered hundreds of variables and published more than 200 papers, publishing three editions of Catalogues of Variable Stars in Globular Clusters in 1939, 1955, and 1973. To most Canadians, she was probably best known for her work in public education. For thirty years, she wrote a weekly column entitled With the Stars for the Toronto Star. She was also the founding President of the Canadian Astronomical Society when it formed in 1971. All this from the sight of an eclipse!


During a lunar eclipse, it is the Earth that gets in the way. Typically, we can see the Moon at night because of the sunlight which is reflected off of it. Depending on where the Moon is relative to the Sun, we see difference phases (see Module 4, Tutorial 3). However, when the Moon is in just the right place, the Earth passes directly between the Sun and the Moon, preventing all of the Sun’s light from reaching the Moon.


The Moon, however, never becomes completely invisible, due to some of the Sun’s light being refracted by the Earth’s atmosphere (see Module 3, Tutorial 2). This refracted light gives the Moon a dim, red appearance. 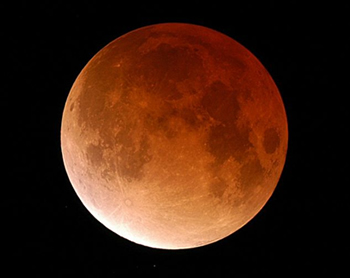 During a lunar eclipse, refracted sunlight makes the dim Moon
appear red in colour.
Often, solar and lunar eclipses occur in equal numbers in any given year. The maximum number of eclipses (solar and lunar combined), which can occur in one year is seven, as was observed in 1982. The next year for a combination of seven eclipses will be 2038. 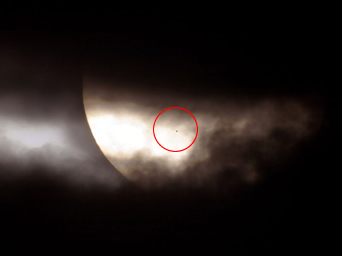 
Most people remember solar eclipses as times when parents told children to stay inside, recess was cancelled at school and the curtains drawn, so that children wouldn’t stare at the eclipse and risk damaging their eyes. But is staring at an eclipse any more dangerous than staring at the Sun?


The answer is both yes and no. It is a well-known fact that looking into the Sun with the naked eye (and especially with binoculars or a telescope) can cause irreversible damage to the nerves in your eye. We have a natural defense mechanism to protect our eyes – we squint! During a solar eclipse, as the Moon is moving in front of the Sun, the Sun’s rays are just as harmful as they normally are, but this time, as the Moon blocks more and more of the light, we don’t feel the need to squint as much, and more of the Sun’s damaging radiation can make it into our eyes.


Check It Out! There are a number of ways to safely view a solar eclipse or transit. Look up the projection method, solar viewing glasses and safe solar filters online using your favourite search engine to learn more about the different techniques