Objectives Radiation is often given a bad reputation. It is a term used when discussing harmful rays from the Sun or cancer treatments. However, it isn’t always bad. Since radiation is actually any energy emitted in the form of rays or waves, without it, life would not be possible on Earth! 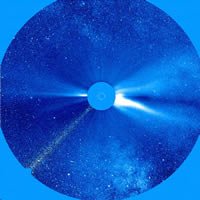 
As mentioned in Unit 6, Lesson 1, the Sun produces radiation when hydrogen fuses into helium, due to the high pressure and temperature in the core of the star. Nuclear fusion occurs when light atoms combine to form heavier atoms, releasing great amounts of energy in the process. 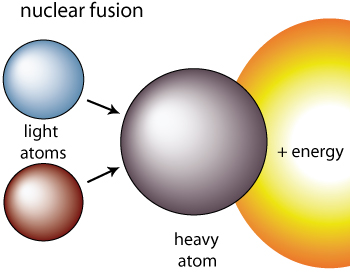 When small, light atoms combine to form heavier atoms,
a great deal of energy is released.

Did you know?
Radiation's getting a bad reputation comes from radioactive decay like what happens with uranium, a radioactive material. With radioactivity, the nucleus of the material is actually unstable in its present state and it naturally splits, giving off smaller particles such as neutrons, protons, or slightly larger clusters of both. These escaping particles are also called radiation, specifically alpha rays and beta rays. As well, this process sometimes releases gamma rays, which is a true form of radiation: light.


Specifically, four hydrogen atoms combine to make one helium atom. However, the mass of a helium nucleus is less than the mass of the four hydrogen atoms which fused to create it. The extra mass is converted into energy through the famous relationship E=mc2, where m is the mass to be converted, and c is the speed of light. This process occurs in all stars, including the Sun, which is composed of about 90% hydrogen.

The main body of the Sun can then be divided into three sections, defined by changes in the behaviour of the heat energy. As aforementioned, fusion occurs in the core of the Sun. From there, the heat energy pushes outward from the core in an effort to “float” to the surface. In a sense, this is what stabilizes the star and prevents it from collapsing inward due to intense gravitational pressures. The temperature of the core of the Sun is about 15 000 000°C.

In the radiative zone, the energy from the nuclear reactions in the core continues to radiate outward, traveling – more or less – in a straight line, until it reaches the convective zone. By the time the energy has reached this top 200 000km of the star, it has cooled considerably. This difference in temperature causes convective motion: warm gas rises even closer toward the surface due to a lower density, cools as it reaches the outer edge of the Sun and becomes more dense, and then begins to fall back toward the core. As it falls, the gas regains heat energy and begins to rise toward the surface again, continuing the cycle. At the top of its motion, some heat is also released into space, and eventually reaches us here on Earth. 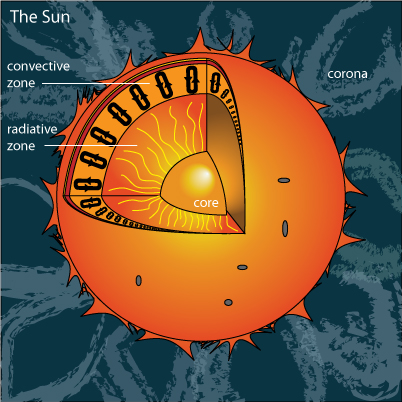 The interior layers of the Sun.

Did You Know ? Surprisingly, it takes more than a million years for the energy to get from the core of the Sun to the corona (leaving the Sun) because of the high density of the Sun!

We can see evidence of convective motion in the granules observed on the photosphere (surface) of the Sun. Bright areas are the hot gas rising while the dark areas surrounding the bright spots are the cool gas falling back toward the centre. Each granule is between 1000km and 5000km in diameter, and only lasts a few minutes before moving or changing shape, due to the constant motion of the gas. The average temperature of the photosphere is about 5700°C – still very hot, but certainly not as hot as the core. 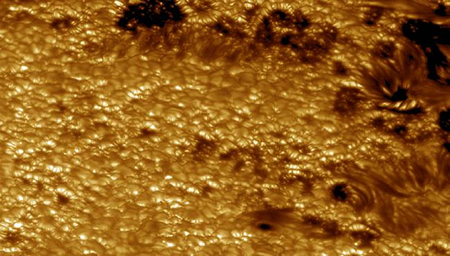 Up close, granules look like little bubbles on the surface of the Sun – and that’s exactly what
they are! Bright spots are hot, rising gas, while darker lines indicate cool, falling gas.