Unit 6 - Lesson 3: Effects of the Sun on the Earth

Reviews - Unit 6 - Lesson 3: Effects of the Sun on the Earth

Information - Unit 6 - Lesson 3: Effects of the Sun on the Earth

Objectives Although the Sun is constantly releasing a steady stream of radiation, occasionally, the Sun releases a burst of greater radiation than usual. Major magnetic storms on the surface of the Sun can release bursts of highly charged particles, called coronal mass ejections. These storms can last for days or weeks, and release tremendous bursts of energy into space in one particular direction. Most of the time, these coronal mass ejections are harmless, as the energy is just aimed into empty space. Sometimes, however, one intersects with the orbit of the Earth, or even hits the Earth itself! The result of this encounter depends on the intensity of the flare.

Most commonly, highly charged particles from weak coronal mass ejections interact with the Earth’s atmosphere to create one of the most beautiful and enchanting sights in Canadian skies: the Northern Lights (aurora borealis). There is more information on this topic in Unit 5, Lesson 2. These natural light shows are very pretty, and relatively harmless. 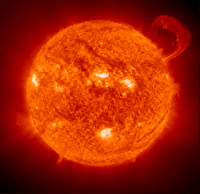 Plasma errupts from the Sun

More intense coronal mass ejections of radiation aimed directly at the Earth can do greater amounts of damage. In the past, large amounts of radiation impacting the Earth have caused disruptions in both satellite communication signals and power grids, causing large-scale power outages. In 1997, radiation from a solar flare hit a telecommunication satellite, rendering it temporarily inoperable. Thousands of people relying on pager service, such as doctors and emergency personnel, were rendered helpless.

Canadian Connection Canada has experienced its fair share of coronal mass ejection-related disasters. In 1972, a high-voltage transformer at the British Columbia Hydroelectric Authority exploded. A change in the Earth’s magnetic field, due to solar plasma interacting with the magnetosphere, caused a spike in electrical current, leading to the explosion. In 1989, nearly the entire province of Quebec lost power when solar plasma interacted with the Earth. Millions of people were left in the dark.


Satellites aren’t the only objects in space susceptible to damage from solar radiation. Astronauts must be very careful not to expose themselves to radiation from a flare. When they are not protected by the Earth’s atmosphere, even wearing highly protective space suits will not shield them from severe radiation poisoning during times of high solar activity. Space missions are planned around times of coronal mass ejections, and during a spacewalk, the space shuttle always positions itself between the astronaut and the Sun, just in case an unpredicted coronal mass ejection occurs.

However, it is not always the coronal mass ejections that do damage to the Earth. Instead, it is what is sometimes found at the root of the flare: sunspots. Like the Earth, the Sun also has a magnetic field surrounding it. Since the Sun is mostly gas and plasma, however, an interesting phenomenon occurs as it rotates. Different locations on the surface of the Sun rotate at different rates, causing the surface material – and the magnetic field lines – to twist around on themselves. If a magnetic field line gets twisted enough, it can bulge out from the surface of the Sun, carrying with it charged particles from the surface. 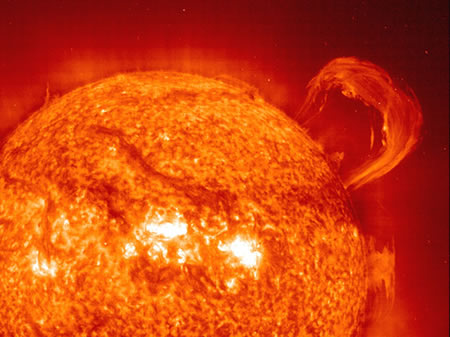 As charged particles from the surface of the Sun travel along twisted magnetic field
lines, they create a prominence – a giant loop of ionized gas protruding from the
surface. Due to the shape of the magnetic field lines, prominences nearly always
exhibit a loop-shape.

While prominences look as though they are fixed to the surface of the Sun, they also release great quantities of radiation and ionized particles into space, much like coronal mass ejections.

At the base of these magnetic field line loops – and hence at the base of the prominences – the surface of the Sun is also altered. The hot gas which gets sucked up into the prominence leaves behind a darker, cooler area. Imagine a stovetop element: when cool, the element is black. However, when heated the element glows a bright orange-red. Similarly, the hot surface of the Sun emits orange-yellow light while the cooler areas appear black. This makes them very easy to spot by ground-based observers. 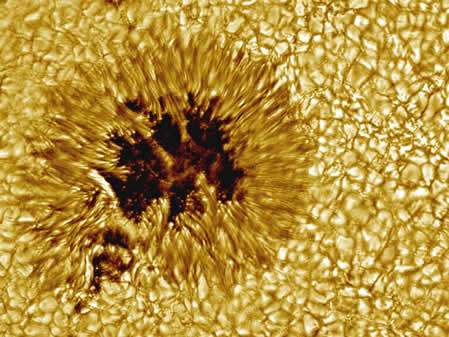 A close-up view of a sunspot illustrates how cooler areas of the surface of the Sun
appear darker than their hotter surroundings. Magnetic field lines are invisible
– we cannot see them emanating from the sunspot.

Did you know? On average, sunspots are about 1500°C cooler than their surroundings! Though they might look quite small through a telescope, sunspots are usually about the same size as the entire planet Earth!


Some years, there are large numbers of sunspots on the surface of the Sun, while during others years, only a few are observed. After many decades of watching and counting sunspots, astronomers have determined that the quantity of spots follows an 11-year cycle, also called the sunspot cycle. Over the 11-year period, the number of sunspots on the surface of the Sun declines to a minimum and then increases again. The last solar maximum – the point in the cycle where there are the most sunspots – occurred in the year 2000, meaning the next peak in sunspot activity will be in approximately the year 2011.

Because these maxima and minima can be predicted, we can therefore also predict the occurrence of a greater number of prominences and a greater risk to the Earth because of them. It is also interesting to note that by knowing the relative number of sunspots on the surface of the Sun, we can predict long-term weather patterns!

The “Little Ice Age” was a period of time between the late 1500s and the mid 1800s when glaciers advanced, winters in the northern hemisphere were unusually cold and the summer growing seasons were shortened. These conditions were well-documented in art and writings from the times, and are still, to this day, perceived as being unusual. One of the leading theories for why the climate changed so dramatically has to do with the number of sunspots observed during that same time period. Solar activity was extremely low, with some years having no sunspots at all. Fewer sunspots indicates fewer releases of solar radiation and hence less solar energy reaching the Earth.

Over a few years, this does not make a large impact on our climate. However over several decades, the lower amount of overall radiation reaching the Earth can have an impact on long-term weather patterns. During the next solar maximum (~2011), it is expected that there will be a greater number of sunspots than average. Will this make our climate even warmer?