This lesson is part of the Athabasca University Astronomy 230: Northern Lights, Northern Skies course. In this lesson, you will learn how to describe the concept of a satellite, how to identify the types of satellites and their orbits, and how to describe two main issues in keeping a satellite in orbit for long periods of time.

Objectives
Most people can identify a satellite as an object orbiting the Earth, but they may not realize the broader implications of the word. A satellite is correctly defined as any object that is orbiting another object. This includes both natural objects and artificial objects, and it extends beyond the Earth. 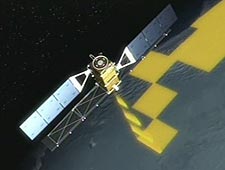 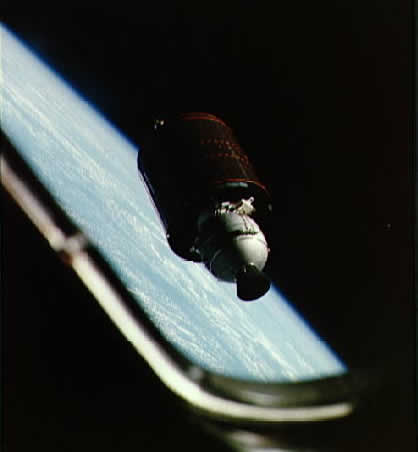 
Did you know?
There are now more than 2500 artificial satellites in orbit around the Earth. Although this number is quite large, there are still only eight countries (as of 2007) that have the capability to launch satellites: Russia, United States, France, Japan, China, United Kingdom, India and Israel.

Did you know?
When an object is in orbit around an object it is actually in continuous freefall. Recall that for an orbit to occur the mass of the large body, known as the ‘primary’, is exerting a force of gravity on the satellite. The satellite needs to be moving at a high enough velocity so that it is not pulled down towards the primary. It also cannot be going too fast or it would just fly off into space. So it must be going at just exactly the right velocity so that as it is pulled down towards the primary it is also moving forward around in the path of the orbit, thereby continuously ‘falling’ towards the primary, but never hitting it.

Canadian Contributions RADARSAT-1 is a large satellite equipped with a variety of Earth observing tools. Launched in 1995, it already provided valuable information for much of the world on such topics as cartography, hydrology, coastal monitoring, climate change and many other topics. It can observe day or night, and in any weather conditon, making very efficient and reliable. Thanks to RADARSAT-1, Canada has become a leader in satellite remote sensing data. RADARSAT-2, a more powerful and updated version, has just been launched in 2007. This will ensure that Canada continues to lead in this field and provide high quality data on resource management and climate change. 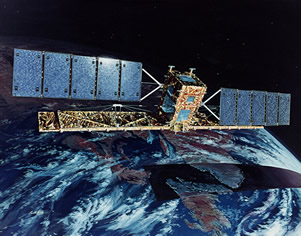 Artist's rendering of RADARSAT-1
Check It Out!
RADARSAT-1, launched in Nov. 1995, is an Earth observation satellite developed by Canada. With a primary objective of monitoring environmental changes, RADARSAT-1 is able to obtain images, day or night and even through thick cloud cover.
Launch the RADARSAT-1 website!


Satellites can also be classified according to the types of orbits they follow. Not all satellites simply run circles around the Earth. Some satellites have elliptical orbits, while others have a geo-stationary orbit where they stay above the same point over the Earth. The altitude of the orbit is also variable, from Low Earth Orbit (LEO) which ranges up to 2000km, Medium Earth Orbit (MEO), and High Earth Orbit (HEO) which starts at 35,786km above the planet’s surface.


As a general rule the lower the orbit, the more quickly the satellite needs to be moving to maintain its path around the Earth and not tumble down to the surface. This gives us the opportunity to see satellites in the night sky fairly easily. A close satellite will mean that it is in a position to reflect enough light from the Sun to be easily seen, but is also moving quickly, making it stand out better against the stationary stars. On a good dark night you can often see a satellite cross the night sky almost every two minutes! 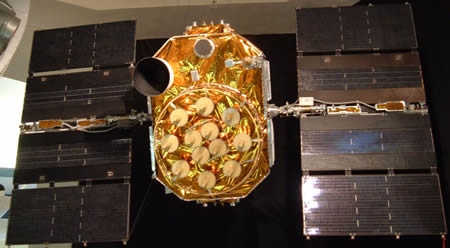 This image shows a GPS satellite during a test. It is easy to see the solar panels used
to power the satellite. These satellites maintain a geo-stationary orbit to remain in
a specifically designed orbit in relation to the other GPS satellites.

Satellites are now designed to stay in orbit for long periods of time. This presents two main difficulties: power and control. For a satellite to keep functioning for a long period of time, it needs a continual source of power. Solar panels and batteries are required to harvest energy from the Sun when its rotation takes it to that side of the Earth.


A more recent development is the control of satellites. For many years, satellites were launched by rocket, or by the Space Shuttle. After that, they were left to continue their orbits as best they could. Some satellites were equipped with fuel to make a limited amount of corrections to problems with their orbit. Recently a further refinement called ion drive has been developed. This is a sort of miniature rocket engine that is about 10 times more efficient than traditional rocket fuel; however, it is limited to smaller accelerations, so it is restricted to smaller vehicles thus far.

This photo shows a test fire of a Xenon Ion Thrust done by NASA at the Jet Propulsion
Laboratory. It is the first non-chemical propulsion engine used to propel spacecraft.
Although it only applies a force equivalent to the weight of a piece of paper, it burns fuel
exceptionally efficiently resulting in an efficiency about 10 times greater than
traditional rocket fuel over long periods.

Check It Out!
Deep Space 1 launched in Oct. 1998. Over the course of its mission, it tested 12 new technologies. After returning the best images and data ever recorded of a comet, it was retired in Dec. 2001